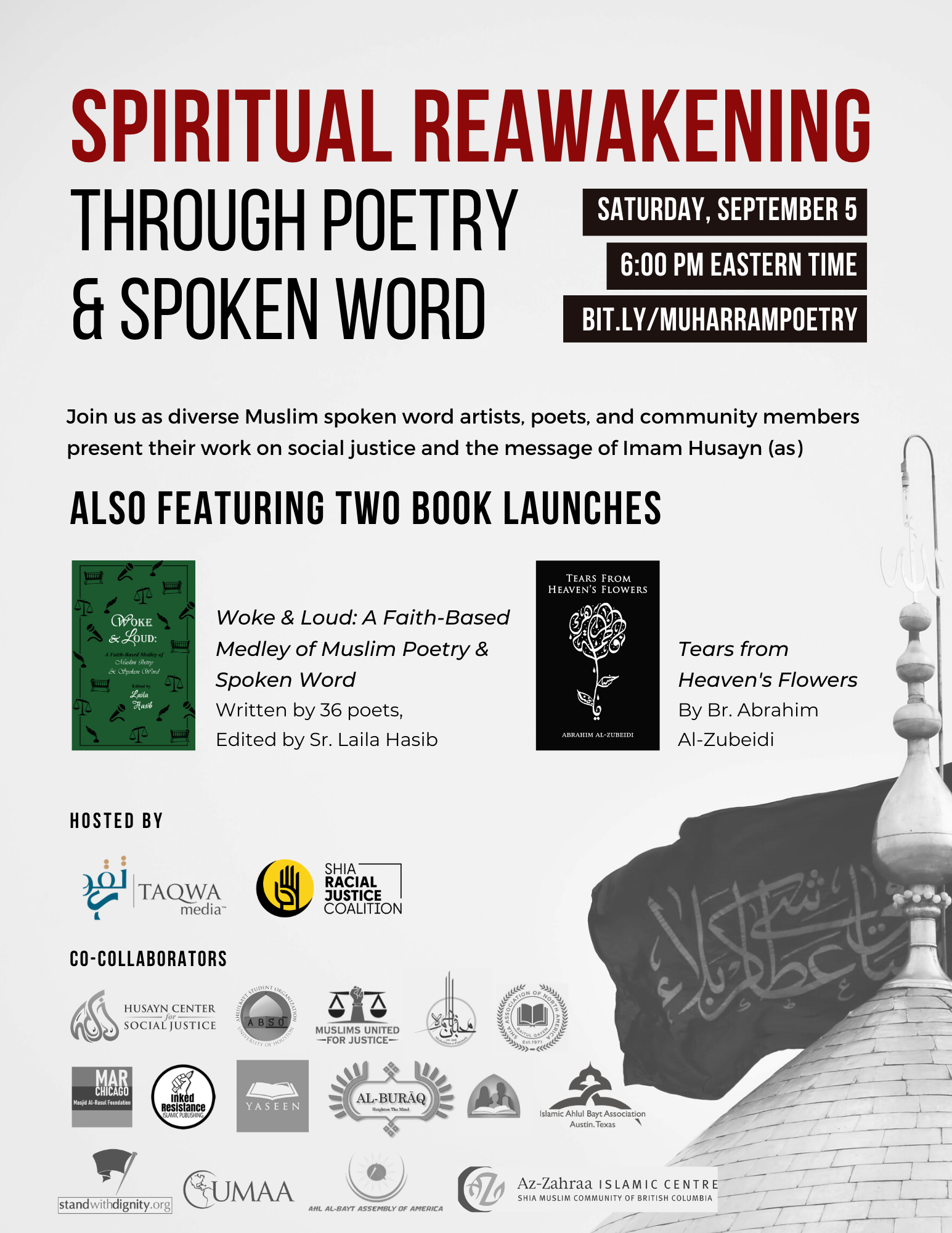 A Bouquet of Muslim Blossoms

A Bouquet of Muslim Blossoms: 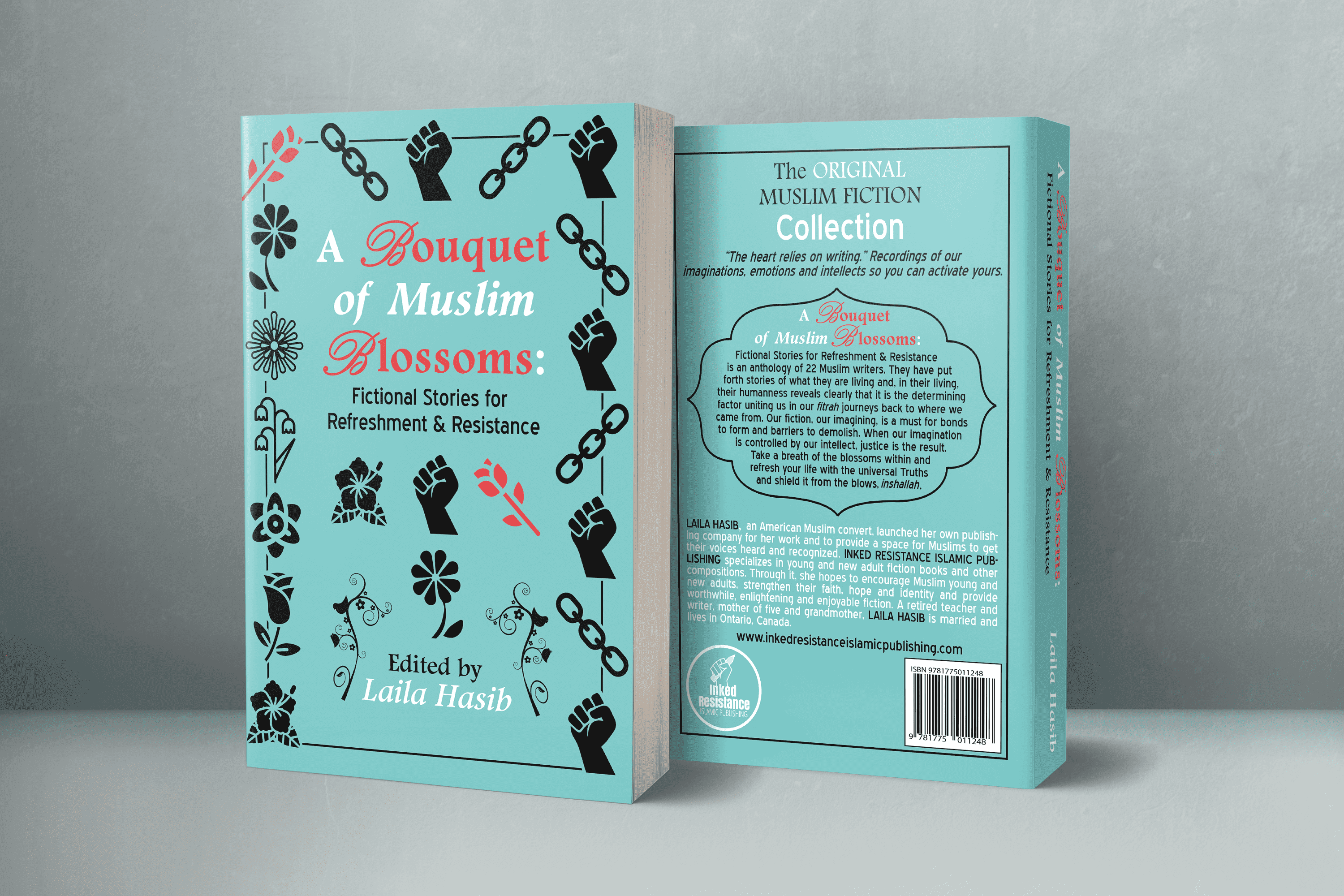 is pleased to announce our brand-new title.

It's a collection of 22 Muslim writers from around

the world and is full of flash fiction, short stories,

The pieces are offered as refreshment and resistance

to you and we hope will provide you with renewed and

Get it now, inshallah. 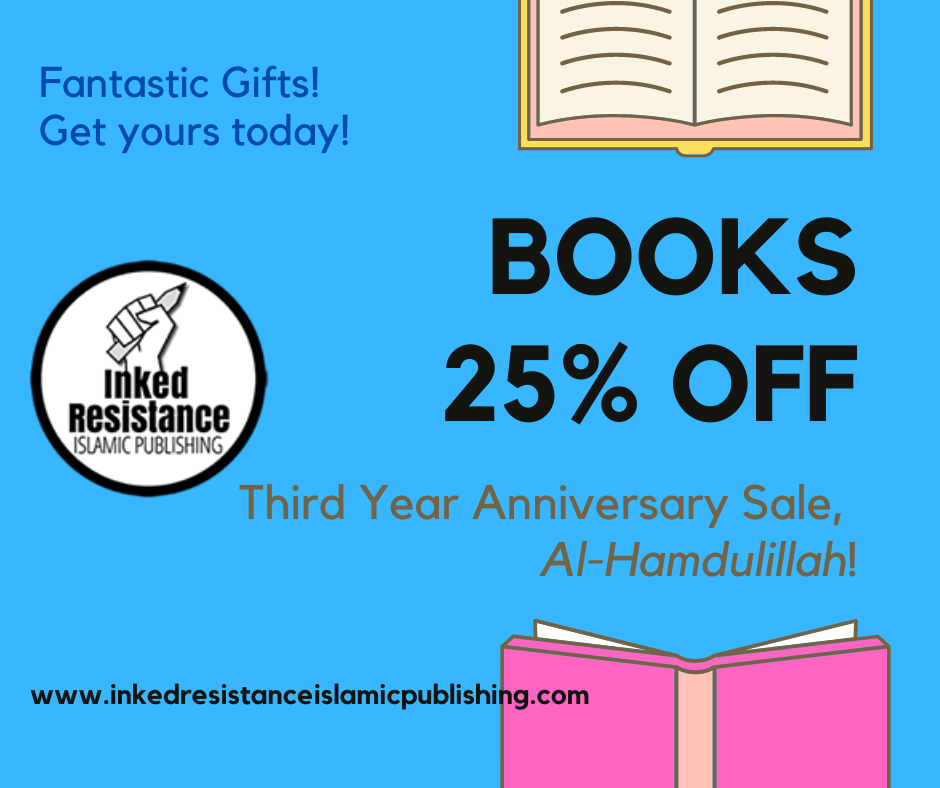 Here’s what we can do: We copy others; show affection and concern without prompts; take turns; show a wide range of emotions; understand mine, hers and his; separate easily from Mom and Dad; get upset with major changes in routines; and dress and undress ourselves. We carry out instructions with

two to three steps; talk well enough for strangers to understand most of the time; carry on a conversation using two to three sentences; and name friends and most familiar things. So we’re well on our way, inshallah!

All kidding aside… As we celebrate the birthday of our esteemed Prophet Muhammad, peace be upon him and his family, we’re offering a 25% discount off our books. Please take advantage of this offer and purchase some books for yourselves, your family and friends, inshallah. It is only through supporters like you, and Allah’s Subhanahu wa ta’ala Help, that we are still going strong! You can shop at Inked Resistance Islamic Publishing Shop or Inked Resistance Ecwid Store or Inked Resistance Etsy Shop, inshallah.

What have we accomplished since we were born?

Books Selling in Bookstores – enabled our books to be sold in nine online and physical bookstores and by two personal distributors in Canada, the US and Australia

Bazaars – sold products at 12 bazaars in the US and Canada

Library – made books available in one library in Canada

As we pay some attention

to the election results

the last day of voting is

let’s find out what’s been happening

in the world since we were born.

This is a snapshot of the past three years. It is not complete. It is not in order. There will be lots of things missing. Information may not be up-to-date and may in fact be slightly inaccurate. We will need to stop at some point and continue the post later because there’s just so many things that have happened. What is important for us to point out is that amidst all of these things, which are so horrible and show the animal side of human beings, the treachery of those in power, there are people like us, inshallah, who are plugging away at making a difference, at exposing the corruption, at lifting the hopes of a better day, a better way to live, a better headspace and heartspace. Remember that things have always been rough, always been difficult and corrupt and unjust and evil, and we’ve persevered. Human beings have gotten this far because there are Allah-fearing, honourable, sacrificing, loving, justice-seeking, patient and virtuous leaders and people and Allah Subhanahu wa ta’ala is on our side. Don’t give up the fight!

Since we’ve been born:

Well, Donald Trump, the US president, was in his first (and hopefully his last) term and his sorted history is too long to run through here.

Let’s just say that he:

Government Shutdowns – shut down the federal government as a result of a dispute over the Deferred Action for Childhood Arrivals (DACA), an immigration policy put in place by former US president Obama; shut down the government for a second time over funding for a US-Mexico border wall, making it the longest US government shutdown

Mexico-US Border - separated children from their parents at the Mexico-US border, keeping them in cages, and sent the military to “protect” the border; caused the parents of 545 children, who were separated at the US-Mexico border, to be unable to be found

Tariffs - extended tariffs on imported steel and aluminium to include the EU, Mexico and Canada; placed a tariff hike of 25% on US$200 billion worth of Chinese products

Pushed for G8 - pushed for the reinstatement of the G8 (to include Russia) at the G7 summit in Quebec, Canada

Collusion Investigation - involved in an investigation of campaign collusion with Russia, which he called a “witch hunt”, and resulted in special counsel Robert Mueller’s report of 10 episodes of potential obstruction of justice

Fell in Love - visited North Korean leader Kim Jong Un, the first-ever meeting by a US president, and said “we fell in love” months after the  North Korea-US summit in Singapore; they met again for a second summit in Hanoi, Vietnam

Retailiated after Drone Shot Down - Iran's Islamic Revolutionary Guard Corps (IRGC) shot down a US RQ-4A Global Hawk BAMS-D surveillance drone, worth US$130 million, over the Strait of Hormuz after it was warned twice and violated their airspace, so the US president retaliated with cyber-attacks on the IRGC’s missile-control systems which did not succeed, at first he had ordered a retaliatory military strike on several Iranian radar and missile sites, but then withdrew the order, he also issued new targeted sanctions against Iranian and IRGC leadership, including Ayatullah Ali Khamenei and his office, Foreign Minister Javad Zarif, Naval commander Alireza Tangsiri, Aerospace commander Amir Ali Hajizadeh, Ground commander Mohammad Pakpour, the IRGC Navy’s Abbas Gholamshahi, Ramezan Zirahi, Yadollah Badin, Mansour Ravankar and Ali Ozma’i,  freezing any assets under US jurisdiction, blocking dollar-denominated transactions and barring international banks from moving money for them

Deployment of More Troops – deployed an additional 1,000 troops to the Persian Gulf area after two oil tankers were damaged, called Iran a “nation of terror”

Impeachment – impeached for abuse of power and obstruction of congress for soliciting help from a foreign government (Ukraine) in digging up dirt on his rival Joe Biden in exchange for the release of nearly US$400 million in military aid – he was the third president in US history to be impeached; he was acquitted by the US senate

White Supremacy – designated the Russian Imperial Movement, a white supremacist Russian group, as a terrorist organization and sanctioned some of its leaders, but defended a white supremacist, neo-Nazi rally – “Unite the Right” - in Charlottesville, Virginia in which James Fields Jr. drove into counter-protestors killing Heather Heyer and injuring 19 other people, and two Virginia state police troopers were killed when their helicopter crashed, he repeatedly refused to talk against white supremacists and militia groups in the US and in his first debate with Joe Biden he told the violent far-right Proud Boys to “stand back and stand by”

US drone attack in Afghanistan - killed 30 Afghan pine nut farmers and injured 40 people in the Wazir Tangi area of Khogyani district of Nangarhar Province, Afghanistan, while claiming to have targeted the Islamic State of Iraq and the Levant (ISIS/ISIL/DAESH), to be called ISIS from here on

Tariffs on the European Union (EU) – imposed US$7.5 billion worth of tariffs on products such as olives, whiskey, wine, cheese, yogurt and airplanes from the EU

ISIS Leader Killed - announced that Abu Bakr al-Baghdad, the leader of ISIS, was killed in a US special forces operation by detonating his own suicide vest after being chased into a tunnel

Reinforced US Embassy in Baghdad - sent hundreds of additional troops to the Persian Gulf region, including approximately 100  marines to reinforce security at the US embassy in Baghdad, Iraq, after Kata’ib Hezbollah soldiers, their Popular Mobilization Forces (PMF) supporters and protesters breached the front gate checkpoint of the embassy following the funeral of the martyrs from the US military operation (see above)

Targeted 52 Iranian Sites – warned Iran that any retaliation for the assassination of General Qasem Soleimani would result in the US destruction of 52 Iranian significant sites, including cultural sites (representing the 52 US prisoners held for 444 days beginning on November 4, 1979), in response to Iran’s Leader Ayatullah Ali Khamenei’s warning to the US that “retaliation is waiting”; Iranian forces in Operation Martyr Soleimani launched tens of ballistic missiles at Ayn al Asad airbase in Al-Anbar governorate and an airbase in Erbil in the Kurdish region, both in Iraq, where US personnel were located, Iran said 80 soldiers had been killed and 200 soldiers were injured, but the US department of defense said 110 service members were diagnosed and treated for traumatic brain injuries from the attack

Evacuated US Citizens from COVID Cruise Ship - evacuated 400 citizens from the 3,700 passengers on the cruise ship Diamond Princess quarantined in Yokohama port, Japan, with cases of the coronavirus on board

Set Free Convicted Felon – commuted his associate Roger Stone’s sentence of 40 months imprisonment, setting him free, for seven felony convictions for obstructing a congressional investigation and witness tampering; Stone is only one of 44 people convicted of federal criminal offenses to whom he has commuted sentences or granted executive clemency

COVID Cures - said the coronavirus could be treated by injecting disinfectant (bleach) or UV lights into people at a white house press briefing in Washington, D.C.

COVID Made in Wuhan Lab – claimed the coronavirus was made in a lab in Wuhan,  China, while the director of national intelligence said it is not manmade

Sicced Federal Forces and Military on Protestors - employed federal forces and the military to push back and beat up protestors in front of the white house in Washington, D.C., over the white supremacist cop murder of George Floyd and threatened to send them to other cities protesting against police brutality, violence and murder of black people and white supremacy and for black lives matter; federal forces, often in body armour, camouflage and riot gear, were deployed to quash protests, beat up and arrest people, clear the streets and patrol cities in Portland, Oregon, Seattle and Tacoma, Washington, Kansas City, Missouri, Los Angeles, San Diego and San Francisco, California, Denver, Colorado, Miami, Florida, Detroit and Port Huron, Michigan, Buffalo and New York City, New York, Dallas, El Paso, Houston and Pearland, Texas

Got the Coronavirus- announced via twitter that he and his wife got the coronavirus and he was helicoptered to Walter Reed national military medical center in Bethesda, Maryland, for treatment

Supported Police after Black Man Shot to Death - visited Kenosha, Wisconsin, to support the police after Jacob Blake was shot in the back seven times by a Kenosha cop, while his three children watched from the car, paralyzing him, saying the protests that ensued were “domestic terror” and that there is no systemic racism in law enforcement

Isn’t that enough? It was only Part 1!

The next parts will be posted soon, inshallah.